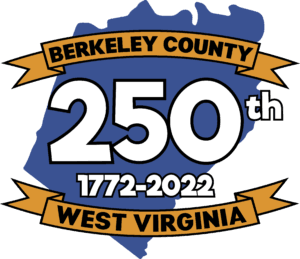 May 15, 2022 marks the 250th anniversary of the founding of Berkeley County, West Virginia!

Located at the gateway to the Shenandoah Valley in the heart of the Eastern Panhandle, Berkeley County is known for it’s unique history, beautiful scenery, robust industry, and more. Formed in 1772 from neighboring Frederick County, Virginia by an act of the Virginia House of Burgesses, Berkeley County originally spanned from the Blue Ridge Mountains in what is now Jefferson County to the famed springs at the Town of Bath (Berkeley Springs) in what is now Morgan County . The county was named in honor of Norborne Berkeley, Baron de Botetourt, a royal governor of Virginia. Adam Stephen, Berkeley County’s first sheriff, laid out the county seat along Tuscarora Creek and named it Martinsburg in honor of his friend, Col. Thomas Bryan Martin.

Since the arrival of Morgan Morgan, the first colonial settler in what is now West Virginia, Berkeley County has been an epicenter of engagement, growth, and community.

During this special anniversary year, we hope you will join in celebration to discover and honor this unique area where history happens here!